The exhaust really controls where how and when power is made, and can usually can be characterized into three main groups. A low revving exhaust usually makes better torque (pulling power), a high revving exhaust usually makes peak power (speed). So choosing the type of power you want, it an important thing when considering exhausts
You can easily get things wrong, for instance using a high revving kit or port timings, but bolting on a low range powered exhaust probably isn't the best idea as one is fighting the other in terms of the way they work. Picking the right exhaust for your set up, also affects the gearing ratio and other set up decision.

1)Low revving exhausts tend to be good for touring, and longer distance work, they will restrict top speed to a certain degree because of this, but you can normally raise your gearing.
These include :-
All Box Pipes :-
Ancillotti
Clubman
Gori SS
JL4 / Road


2) Mid range exhausts are generally used for all round use, bit of acceleration, plus a bit of touring. Keep gearing standard 5.00 to 5.22 ratios.
These include
Ancillotti Sport
Gori GP
JL4 Race


3) Higher revving exhausts give good acceleration and top speed, but tend not to be as good for touring as the scooter is revving higher to achieve the same speed. The engine revs need to be kept higher to achieve the performance, best to use low gearing.
These include
Any Casa Expansion
TSR / ScootRS / Sterling
Scorpion
NK

Box pipe retains the look of the traditional exhaust, and is ideal if you want more understated looks. Most box pipes give less power then an expansion as they are a compromise of looks over power. How ever they do give a good linar power delivery, no waiting for a power band to kick in. A few can give very near expansion chamber performance, such as the Avanti exhausts.
The expansion chamber is specifically designed to make the best power possible **taking into account how it is made to give power delivery. They will nearly always have an silencer end can sticking out of the body work, and may or may not need bodywork modifications to fit. 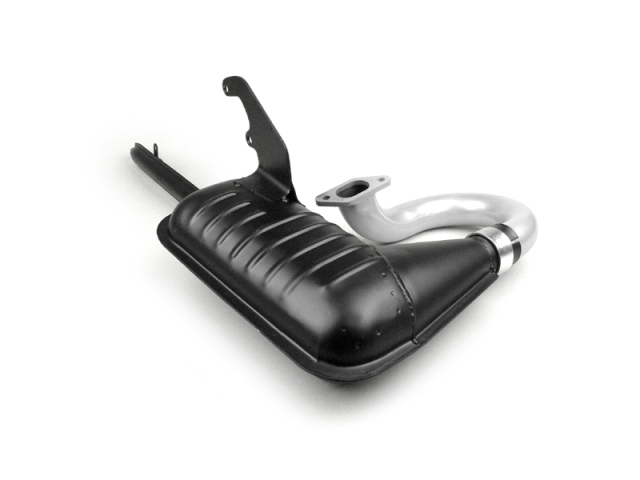 Casa S1/2 Big Bore
For those of you with a Lambretta Li Series one or two, or a TV175 Series 2 Casa has produced this original looking big bore for some time now. Indeed it makes better power then the Casa S3 big bore. Good quality, easy to fit, low down power makes this a winner for early machines.
Produces Power 6500 to 7500
125 - 200cc Works on all engines
225cc + Will work on most engines pretty well up to 225cc 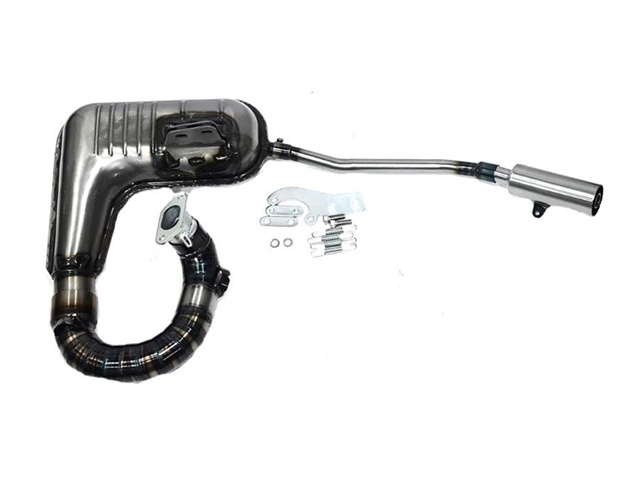 SIP S1/2 Big Bore
SIP in Germany has dived into the market of original looking big bores for owners Lambretta Li Series one or two, or a TV175 Series 2. Although SIP produce a few different examples, we have chosen just to stock this straight through one with seperate end can as it produces a touch more power over their standard ones. The difference is the main silencer has no internal baffles to promote more power, but to keep things quite there is a seperate end can tail silencer.
Produces Power 7000 to 8000
125 - 200cc Works on all engines
225cc + Will work on most engines pretty well up to 225cc 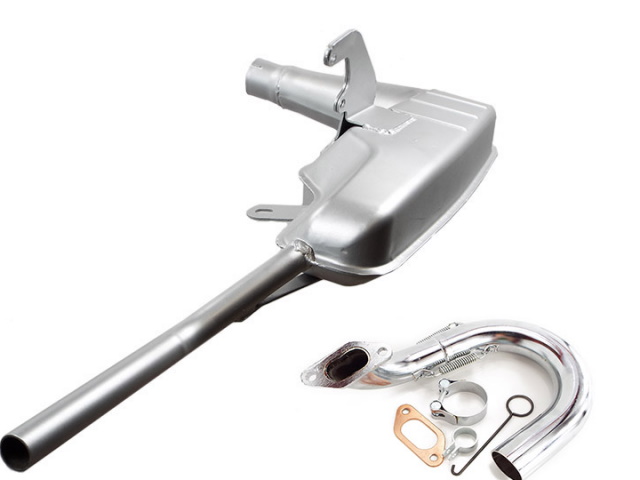 Manufacturered by Scootopia, this is a copy of the original Tino Sacchi Ancillotti. It does everything it should do, for less money than the Tino version. Two piece U bend makes fitting it a little easier.
Produces Power 5500 to 6500
125 - 200cc - (12hp) Ideal for standard engines, and those with the smaller cc kits.
225cc + While it will still work, the clubman starts to run out of puff with the bigger engines, and can restrict top end speed. 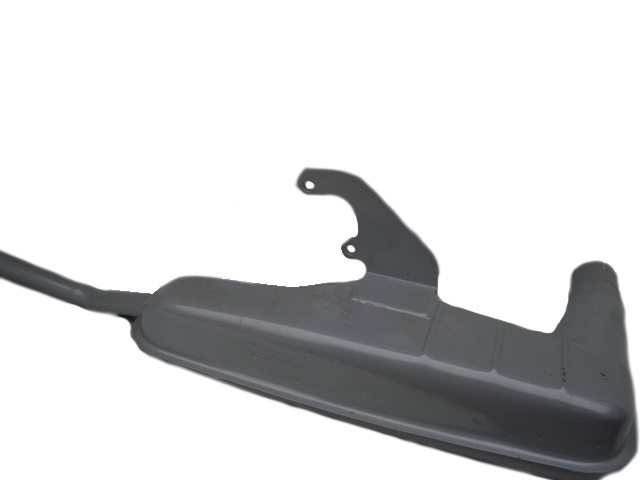 Tino has got major manufacture Sito to produce this exhaust, quality is good. The U bend is now a one piece affair, which although makes it slightly harder to fit, less joints makes less problems.
Produces Power - 5500 to 7000
125 - 200cc **Our Choice (13hp) as well as improving performance on all standard engines, this will work well on kits up to 200cc (Mugello - Casa - Scootopia - BGM - GT etc)
225cc + As per the Scootopia exhaust, it will work, but there are better options to release power for the larger cc engines. 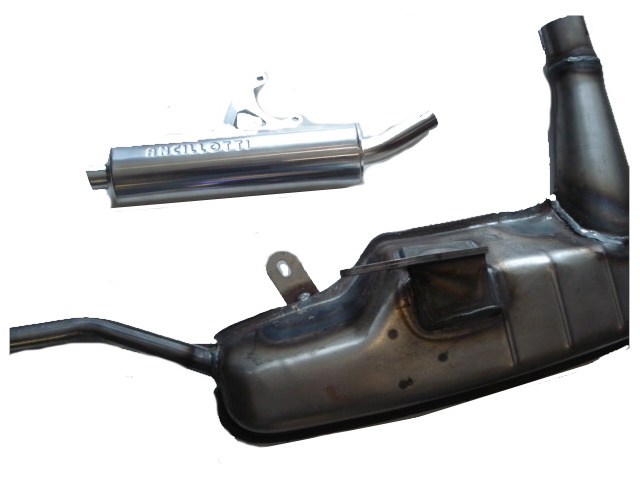 Rather the sitting still, Tino continually looks at and develops his products. The shape of the exhaust is controlled by the desire to keep them looking original, but when you add the internal sound deadening of standard type exhausts, it kills some power due altering the flow of gasses. To overcome this, the actual box is now hollow, making it act more like an expansion chamber. There is an external small muffler at the end of the tail pipe, which kills the excessive noise, making this not only more powerful then the clubman and standard Ancillotti, but also quieter
Produces power 5500 to 7500
125 - 200cc (15hp) Good strong power, revs beyond where others have given up.
225cc + because of the restrictive sound baffles now making way, the exhaust copes well with the more gasses produced by bigger engines. Will also work on Imola / Monza / TS1 style kits where you want more original looks, or you want to restrict your power to lower down the rev range torque. 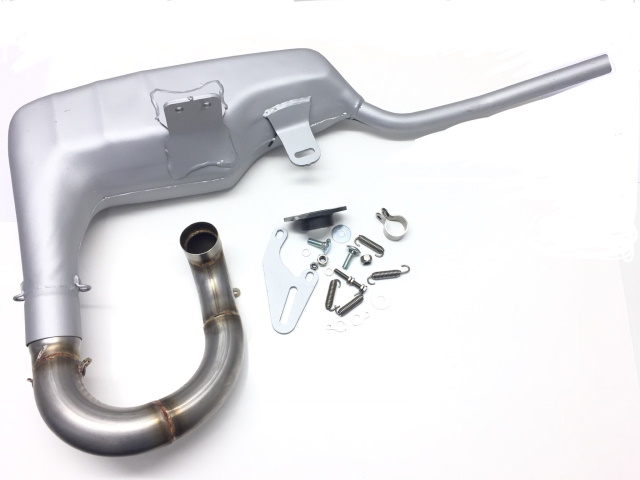 Relativly unknown in the world of exhausts, the Ex Box is made in the UK, by Ron Moss. This exhaust makes very good strong power, and out performs others of its like. Suited to most engines, it is really well made, manufacturered in the UK, and fits very nicely as well.
Produces power 5000 to 7500
125 - 200cc (16hp) Good strong power, and revs on for more speed.
225cc +A great choice, but the Avanti ST is better if you dont mind the additional end can 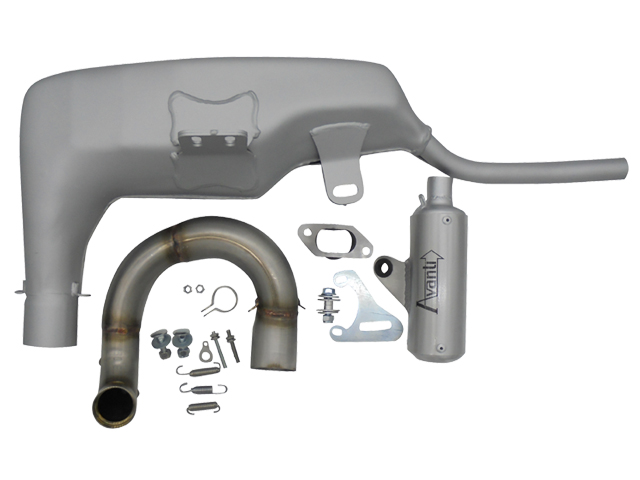 The Avanti ST, like the Ex Box is made in the UK, by Ron Moss. Out of all the Box type exhausts on the market, this is the second most powerful out there, in terms of peak power and rev on. Suited to most engines, it is really well made, manufacturered in the UK, and fits very nicely as well.
Produces power 5500 to 8000
125 - 200cc (16hp) Good strong power, and revs on for more speed.
225cc +**Our choice. Provides the highest power for a standard big box on larger cc. 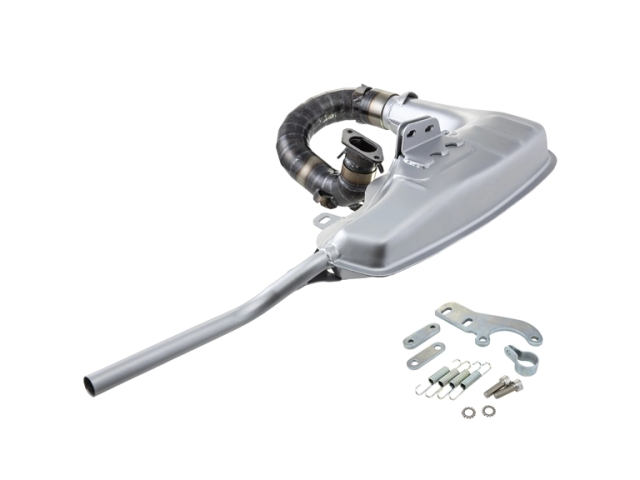 SIPs range of Clubsport exhausts look like a copy of the BGM. Although relativly new to market, they look well made, and we suspect will perform as per the BGM.

There is a big range of the Clubsports, to fit standard / TS1-Imola / Quattrini kits. then you can choose from standard, silent: it has an end can on it, or silent curly: the end can curls back under the scooter so it is hidden.
Produces Power 5500 to 6500
125 - 200cc - (12hp) Ideal for standard engines, and those with the smaller cc kits.
225cc + While it will still work, the clubman starts to run out of puff with the bigger engines, and can restrict top end speed. 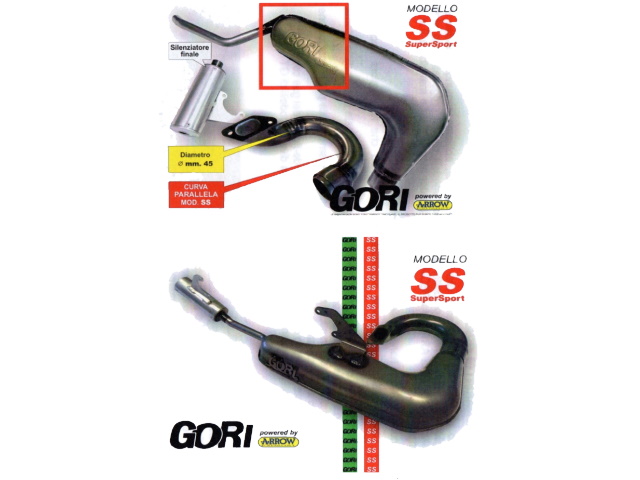 Gori exhausts are a reproduction of the original 1960's exhausts, still overseen and manufactured by Mr Gori himself. Arrow now produce this for him, quality is patchy. Difficult to fit U bends, brackets may need to be adjusted to make it fit any thing other then completely standard engines. The SS (used to be called sport) is aimed at the smaller cc engines.
Produces power 6000 to 7500
125 - 200cc Designed for smaller cc engines, it still works well up to 175cc maybe 185cc engine. Any bigger then that, your better off with the GP
225cc +Not really suited to large CC engines. 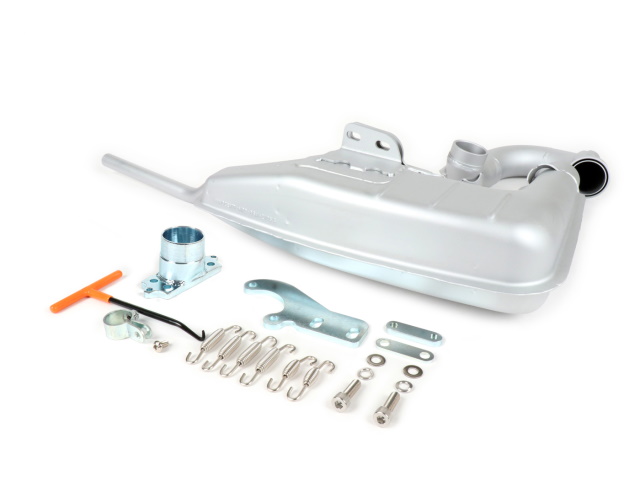 There have been a number of revisions to the BGM exhausts, overcoming design issues, and generally improving them. Quite a conservative exhaust in terms of allowing the engine to rev, but makes great low down torque. Slip joints and brackets make it easy to adjust and fit.
Produces Power 6000 - 7000
125 - 200cc Good low down torque, ideal for touring
225cc + Although this is a good low down touring exhaust, it does stifle quite a lot of power on the larger 225 and above engines. 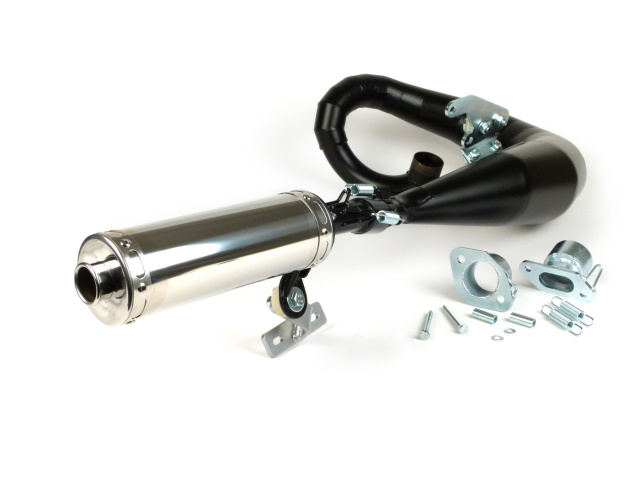 JL exhausts have been around since the year dot. There are many versions, model names and styles, but in essence they all are take offs of the basic 4 versions. We stick with two of them, this the JL3 suits almost every engine apart from the exotics. Produces power nice and low down for an expansion, so make it ideal for touring and all round use. Double skinned, slip joints makes it a long lasting exhaust, and easy enough to fit
Produces Power 6500 to 7500

JL Super Tourer
A mild update of the ever popular JL3, the Super Tourer recieved slight tweaks in the cones with improves power over the standard JL3. Updated fixing brackets, including a newer three point rear fixing makes this exhaust even better then the JL3 it is based on.
Produces Power 6500 to 7500
125 - 200cc Works on all engines
225cc + + **Our Choice one of the best out there, works on all engines, except the exotic's. 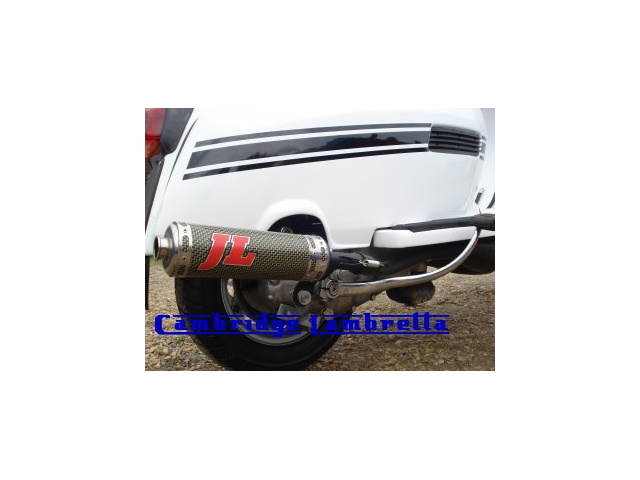 The race version of the JL range gives more fun for razing around, and again like the JL3 it works on a wide range of engines and kits. This is single skinned, so they can be prone to cracking on the U bend, so you just need keep an eye on that. We always suggest rubber mounting this exhaust to help stop fatigue of the exhaust caused by vibrations
Produces Power 6500 to 8000
125 - 200cc Perfect pipe for razing around having fun.
225cc + If you want fun, it's hard to beat this. 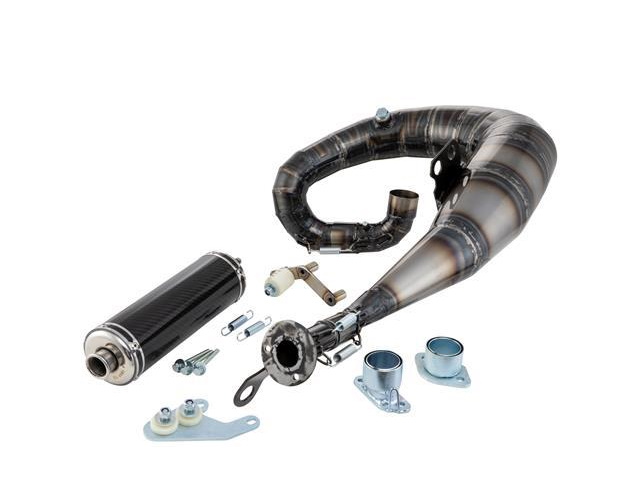 German companies SIP and Nordspeed have joined forces and made their version of the JL. Very similar to the JL3, with a bit more rev on.
Produces Power 6500 to 8000
125 - 200cc Perfect pipe for razing around having fun.
225cc + If you want fun, it's hard to beat this. 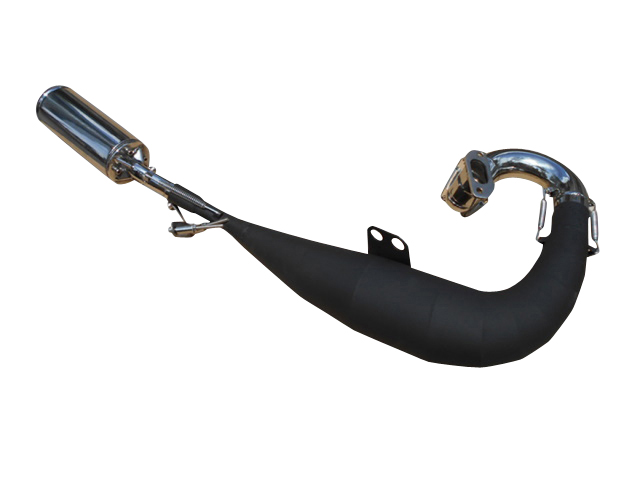 Budget Pipes
The basics of all these exhausts are pretty much the same. Originally the now defunct ScootRS took a PM tuning exhaust, and copied it. The major change was they made it with a slip joint to the cylinder.
Later, Sterling also made a copy, and we now sell these as a cheap budget bolt on exhaust for certain set ups. We suggest carbs on the larger side, to allow enough fuel to get in and keep your engine running cooler.
125 - 200cc Its a cheap budget pipe, if you set your engine up correctly it represents good value for money.
225cc + No good for larger CC engines 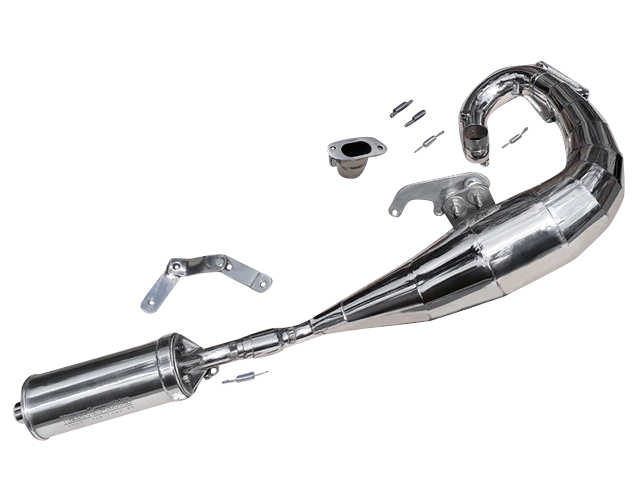 Budget Pipe Stainless
Exactly the same as the mild steel budget pipe, but made from stainless steel.
Whilst the stainless exhausts can make some good power on most set ups, there are some inherent issues with the amount of heat they retain in the motor. For safe running, it is always recommend to run more retarded timing, and slightly over jetting to keep the motor running as cool as it needs to. This is more a priority on cast iron cylinders.
125 - 200cc Works on all engines, but must be jetted and set up correctly as can retain too much heat if not set corectly
225cc + No good for larger CC engines 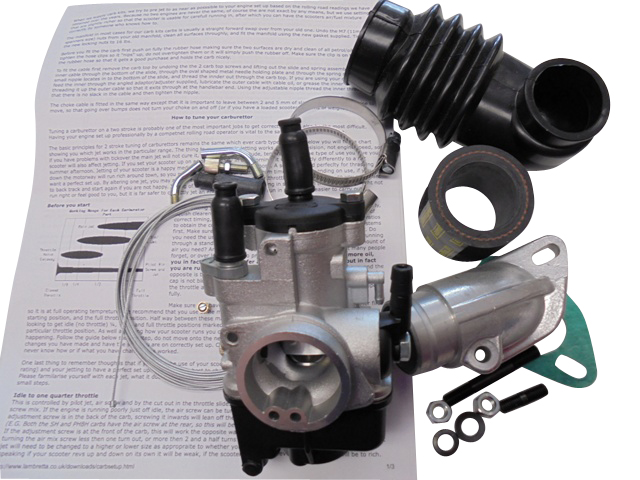