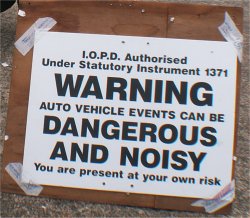 We stumbled across the sport of motor sprinting quite a few years ago, but never really thought much of it, until one day at a local meeting in Waterbeach just outside Cambridge we entered two of our scooters for a bit of fun and something to do on a Sunday! Needless to say once we had a go, we found it fun, so decided to have a go "properly" for the next season, as the one we had entered was the last meet of the year.

Fast forward to 2005, and plans for a fully blown sprint bike we as ever well behind schedule as the workshop is always busy. Not to be deterred, we set about using some of our demonstrator scooters to enjoy the fun any how. These scooters are normal road going scooters, used for rallies, riding to the shops, customers trying out the kits we sell, and all round general use, our Imola even goes down the 1/4 mile with a rear backrest, spare wheel and inside leg shield tool box full of tools! Our intentions with these scooters are not to try set or beat records, but to show that normal road going Lambrettas with the small block Imola engines can be fast, fun and reliable!

In 2005 we only managed to enter two events, we got off to a good start entering the first two events, and then Euro Lambretta and work over load took over. Needless to say we had a little fun, with the best times being achieved as follows. Peter Bowden, Imola sprint, 16.68 seconds with a terminal speed of 73.16mph gaining a first place and trophy at Wattisham, and Trevor Peat at the same meeting recorded 17.09 seconds, and 72.77mph. 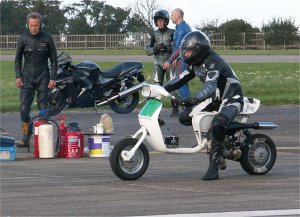 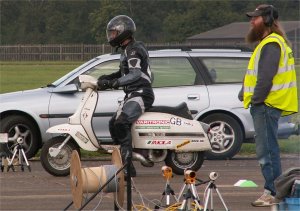 For 2006 Peter rode the sprinter, and Trevor rode a road going Imola sprinter. We managed to attend most spring meetings, but due to scooter rally comitments, and some familie ties, we were unable to complete the full calender of events, and gain our full points, we finished 2nd overall in our class.

For 2007 the Imola sprinter was set aside, and some major changes to the Monza Sprinter were made in terms of porting work, all new exhaust, and some other additions saw Trevor riding the scooter and the new best time fell to 13.02 seconds. Again due to other commitments, Trevor was unable to complete a full season, not completeing enough events to have any chance of taking the tittle in his class, but the sprinter was fast, and 100% reliable every time.

2008 was a busy year in the shop, and we didnt manage any new changes to the sprinter, so Trevor decided to not run in the championship. To dust the cold cobwebs off, we took the sprinter to Santa Pod in 2008, this was an event celebrating 50 years of sprinting for the Straightliners.
Trevor and Peter both had a go on the sprinter, and set the fastest times of the day for Lambrettas. Trevor managed 13.50, and Peter managed 13.90, which was nearly a second quicker then all other Lambrettas, and very good considering the head wind we all had that day.


The current spec of our sprinter is as follows :-

The Monza 240 features a ported Monza kit, 62mm stroke crank, hand built expansion, 30mm PHBH power jet carb, Varitronic ignition. The frame has been stretched by two inches, light weight fuel tank, and a few other toys added. In the first season we achieved 13.27 with a terminal of 97.50mph. On a local dyno, the power output was 29bhp, at a run of 110mph, which of course will be less on the track, but it was geared and expected it to be near the 100pmh mark.

Futher tuning and a new expansion built in September saw results on a differing dyno as follows. As original spec 26.5bhp (shows how different dynos can give very different readings), after more porting work and new expansion power at the rear wheel now reads 37bhp. Coupled with a change of gearbox, the sprinter is now very reliable, with a gearbox and clutch basket (supplied by another shop!!) being the only failures.

Work for the new season will concentrate on weight loss. 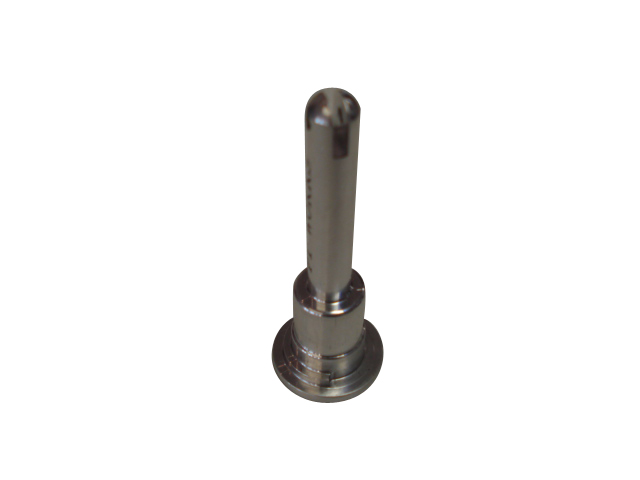 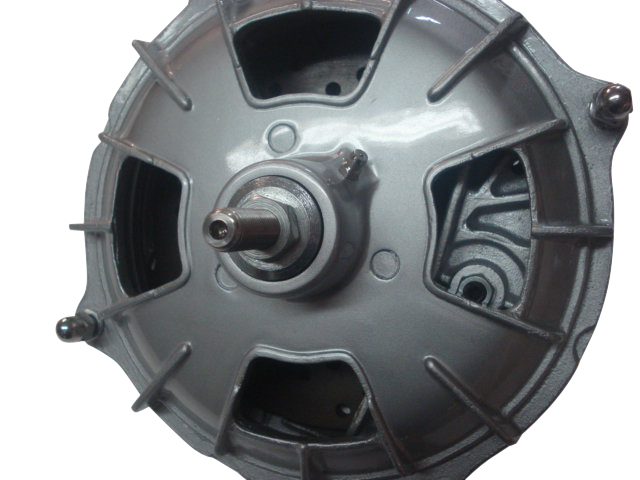